VR, for those who don’t yet know, refers to Virtual Reality headsets, such as the Oculus Rift, the HTC Vive or even Google Cardboard:

This cutting-edge technology will plunge you in a virtual universe, enveloping your field of view and allowing you to move your head — and sometimes entire body — in any direction, completely seamlessly.

We have been working on VR training solutions for two years, first on mobile platforms, and later using more advanced headsets — namely the developer kit v2 of the Oculus Rift. This allowed us to integrate VR early in our design process, and better understand its specificities.

What we discovered, is that VR is first and foremost a way to increase engagement during training. We wish for people to step into an environment which they can embrace and make their own while remaining entirely safe.

VR has been out there for over a year, but it is still experimental in many regards. The cost and technological requirements to run VR are extremely high at the moment. Games and other apps running in VR are still mostly tech demos and experimental products. And there is the problem of motion sickness, which we’ll come to in a bit.

But we have embraced the technology and are working with its quirks and faults to deliver cutting-edge solutions. There was one major problem we had to face though: cable-management! 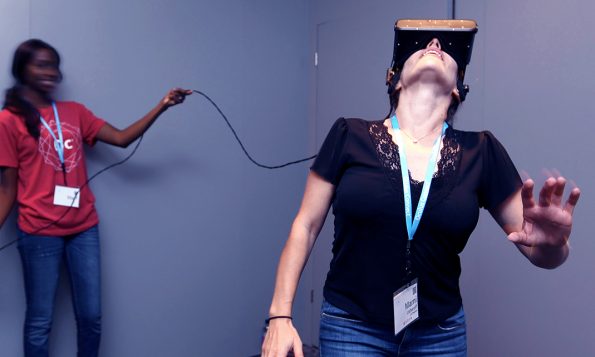 Current VR headsets — those powerful enough to deliver a convincing immersive experience — require a cable to be connected to a computer or console. This becomes a real problem when designing a game where people will turn around regularly.

First we got good e-sport chairs so people can comfortably turn in any direction. And then we devised a way to transform articulated lamp stands into overhead mounts for the VR headsets. With a bit of trickery and a few extra bits of hardware, we had a room set up for an optimal VR Heist!

Though our event was a success, one problem stuck out: VR sickness. Yes, the issue is common enough to have its own name and Wikipedia page.

VR can cause motion sickness frequently, and to a vast majority of users. Though we designed The Heist VR to minimize this effect using slower character movement, removing control over the camera’s orientation other than through the headset, … the issue was still there.

Both before and after this event, we did a lot of research on the subject, and the results are three main factors to take into account:

Is it worth the effort?

The technological and logistical problems make VR quite hard to truly get involved with at this point in time. Even companies like Samsung, Google and PlayStation’s efforts to make it more accessible and user-friendly are months from VR headsets becoming a standard piece of living room furniture. I’d expect that 6-18 months from now, we will see all-in-one high-end VR solutions for under $800, which will disrupt things quite a bit.

In fact, we believe that the incredible feeling of total immersion that VR brings to the table is well-worth the effort. Experimenting with the technology, especially in the fields of skill acquisition and learning solutions could help shape the future of business. You will often read or hear that one cannot simply explain the sensation of stepping into a virtual world, that it must be experienced before you can decide it’s worth. This is absolutely the case, and I would urge anyone who has not tried it to give it a shot at least once.

We often quote Aristotle who said that ” for the things we have to learn before we can do them, we learn by doing them “ and this is true both for what we train, and for what we practice. Virtual Reality is not entirely ready yet, but unless we use it, it will never be.